The best
Chocolate Films
of all time

Five Best Flicks, you should know 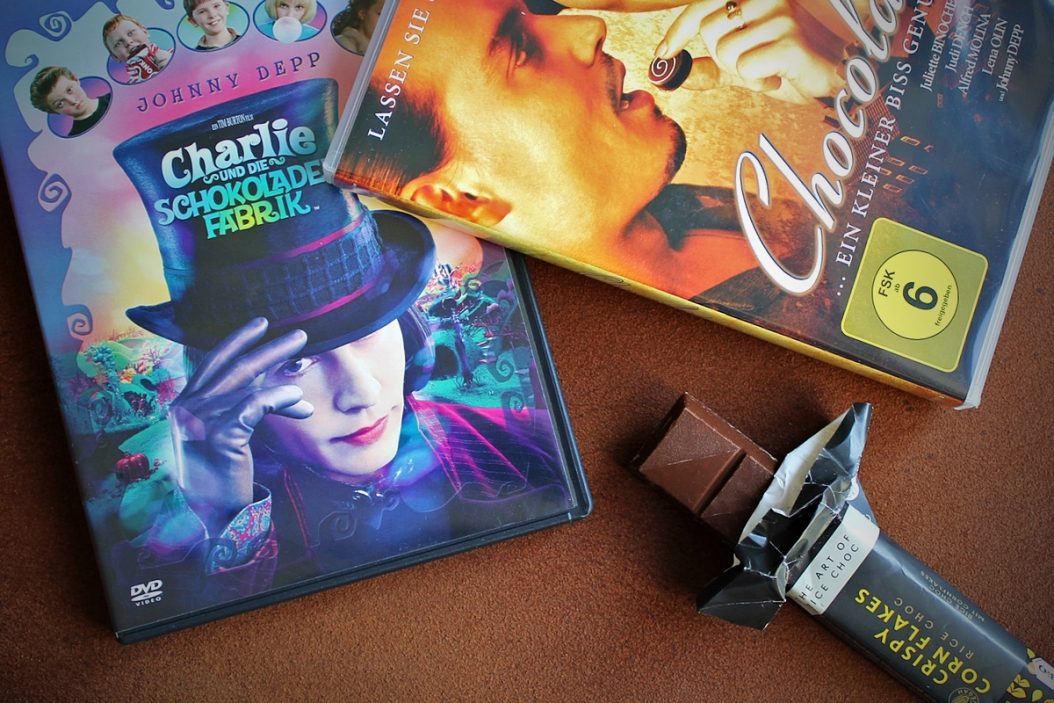 It’s the middle of winter, and the only place to get comfortable is at home on the couch far away from the cold and miserable weather. Any chocolate fan sitting on the couch (hopefully snuggled up and equipped with a nice cup of hot chocolate) can now turn on the television and get ready to embark on a chocolatey journey. Today we present to you a selection of films about chocolate, which in our opinion a real chocoholic should see at least once.

The order of the films presented today are not meant to be in any ranking order, but I must confess the first selection was no coincidence… Charlie and the Chocolate Factory is undoubtedly a must see in the realm of chocolate films. A fantastic, bombastic chocolate fairy tale with a truly star-studded cast. A film brought to life thanks to genre director Tim Burton, a director with a very unique grotesque style. Charlie and the Chocolate factory is a well-known story based on a children’s book written in 1964 by the Welsh-Norwegian writer Roald Dahl. The story was later produced in 1971 as a musical. Burton gives this film his signature touch with the help of Johnny Depp casted in the leading role as the mad Willy Wonka. The movie is a bit reminiscent of certain classics like Edward Scissorhands and Beetle Juice.

The story focuses around a young boy from a poor family by the name of Charlie Bucket. Charlie is one of a few children in the world who receive the opportunity to visit the marvelous chocolate factory owned by the eccentric chocolate mogul Willy Wonka.  Accompanied by a number of wealthy and spoiled children, Charlie embarks on a journey into a remarkable world. The film contrasts the essential riches of the world such as: family, friendship and honesty in an exaggerated manner against the seemingly essential material values, all while of course maintaining a happy ending.

The fact that the concept of Charlie and the Chocolate factory continues to exert an unbroken appeal to fans can be attested to the theatrical adaptation of the story. The play debuted in London in 2013 and moved now to New York’s Broadway. In September 2018 it will start a national tour through the U.S.

Chocolate and Johnny Depp again? Whether the woman’s heart-throb is really as sweet as chocolate and therefore necessarily has to play a role in chocolate blockbusters still remains to be seen. As luck would have it the U.S. actor plays a supporting role in “Chocolat – One Taste is all it Takes“, a film starring leading actress and Oscar-winning performer Juliette Binoche. The movie is described as a “fairy tale for adults“, set in the French countryside towards the tail end of the 1950’s. Vianne Rocher, a descendant of Mexican nomads arrives with her daughter in the sleepy village of Lansquenet-sous-Tannes, where she opens a chocolate store. The new shop has a difficult start as the older more conservative village is apprehensive in trusting the new foreign chocolatier. With some time Vianne is slowly able to educate some villagers to become a bit more tolerant. However, her fierce opponent the mayor continues to make life difficult for her and the situation quickly escalates when a group of nomads, including Vagant Roux (Johnny Depp) settle along the river. In the end, the situation is resolved with a grandiose chocolate celebration.

The film Chocolat – One taste is all it takes is based on the novel “Chocolat“ from the British writer Joanne Harris (1999).

Chocolate films seem to be particularly popular in France. Again in 2011, there was another cinematic highlight from the land of chocolatiers, a film classically tailored towards the genre of romance. In his romantic comedy director Jean-Pierre Améris brings together two very shy characters who experience a number of humorous encounters from interlinking misunderstandings within the story. As a result of a lack of innovation, the reserved chocolatier Jean-René is driving his company right into the ground,. Due to the circumstance the creative, but equally uptight Angélique applies to work for the company. The problem: based off a misunderstanding connected to her shyness is that Angélique ends up entering the company as a member of the sales staff. Through some unusual means she attempts to share some of her new and innovative ideas. The two chocolatiers begin to fall in love, but have a hard time connecting with one another due to their ever-present shyness. It is a real carefree chocolate romance for fans of American screwball comedy.

Yet another French film, this one by the name “Merci pour le chocolat“ by director Claude Chabrol. This work is also a film adaptation from the novel “The Chocolate Cobweb“ (1948) written by the American novelist Charlotte Armstrong. What immediately stands out in this film, contrary to the typical positive role that chocolate plays is the fact that in this movie chocolate is seen as the evil doer. This is brought to fruition when the main actress Isabella Huppert aka Mika serves her victims poison in the form of a chocolate drink. Mika is an heiress to her second husbands company and is fixated on eradicating any other possible beneficiaries. Her weapon of choice is a deadly cocoa and no one is safe from her wrath, whether it be her husband’s first wife, her stepson, or even her husband’s infant daughter.  Mika is not the typical monster villain, rather she is more focused on weaving a protective “cobweb“ around her marriage. In doing so, she clearly lost her sense of good and evil somewhere along the way. Through some phenomenal acting chocolate can be seen in a different position away from the usual sweetness and romance.

The Mexican love drama “Like water for Chocolate“ takes us to Mexico prior to the revolution of 1910. The two lovers Tita and Pedro are unable to marry, due to the fact that Tita’s mother has chosen her as the youngest daughter to take care of her as she ages. Pedro ends up marrying Tita’s sister Rosaura and Tita is forced to live in their house as a cook. Tita bakes the wedding cake for the couple and realizes that she can express her feelings for Pedro through food. This is in fact the main reason why the wedding guests fall into a state of melancholia after enjoying a piece of cake. Tita and Pedro are forced to live their lives, separated from one another, regardless of the fact that they share feelings for one another. Because of these feelings the relationship between the two sisters becomes very difficult. Tensions between the family continue to rise until Rosaura passes away, and Pedro and Tita can finally be together. The film is truly dramatic from start to finish and received a number of international awards, primarily in South America. Director Alfonso Araus’ film is based on the novel “Como agua para chocolate“ (1989) written by his wife, the Mexican writer Laura Esquivel Valdés.